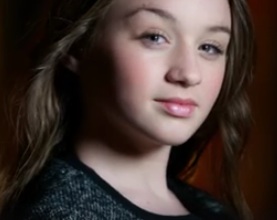 Aimee-Lea loves to perform, whether that be singing, dancing or acting. She has been awarded 2 awards for her promising ability in musical theatre and has won numerous solo parts for her singing in her current dance school. She is outgoing, hardworking and always willing to learn. Aimee-lea is a very polite and respectful little girl and is capable of mixing in large groups and also working alone. She is also confident in horse riding and has recently gone back to piano lessons again but is still at beginner level. Aimee-Lea won the 'Liverpool Has Heart' under 12's trophy for her vocal performance during a charity event in 2013. She is also recently through to Teen Star UK North West Finals after being picked by the judges after competing in Liverpool Regional Finals of Teen Star UK. * Aimee is a Spotlight Member.

Aimee Lea cover of "Yours".

Aimee aged 13 singing Sam Smith's "The Writing On The Wall".

Aimee Lea aged 12 singing Ella Eyre "We Don't Have To Take Our Clothes Off".

Aimee and Jack Winders performing "Thinking Out Loud" a couple of hours after meeting.

Aimee Lea aged 12 Singing Sam Smith's "Like I can".